Do you live a life of purpose or drama? 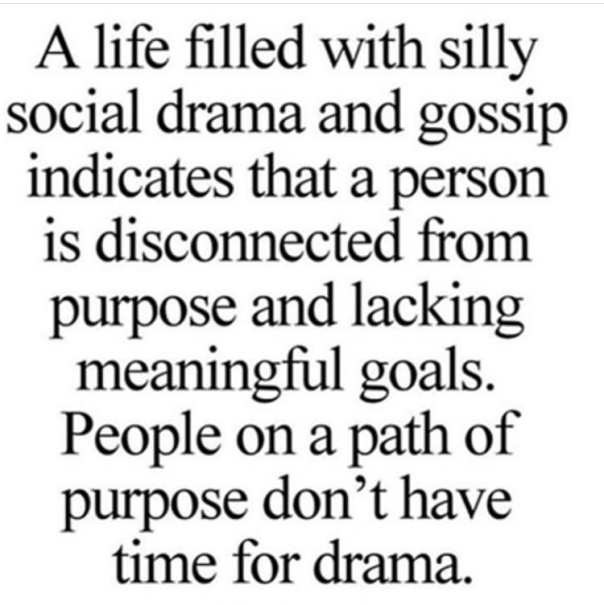 Sometimes people intentionally fill their lives with people they view as more screwed up then themselves (better than, less than human behavior) so they never have to heal and address their own reflection. Long as there’s drama, they feel safe. You can only be wise once you admit how stupid you’ve been. Live a purpose driven life instead of a life frontin for the gram (Instagram).

Thank God for all the sandpaper people in your life! They may scratch you, but eventually they’ll be useless once they’re worn out and you’ll end up smooth and polished!
*drops mic* 🎤

Are they talking about you?

You have to REALLY (and I mean REALLY) not care what people say about you. Listen, you could make the best apple pie in the world and there is ALWAYS going to be someone, somewhere that hates apple pie. With that being said, people throw shade. Why? It makes them feel better about themselves.Sinful human nature caters to “better than, less than” people feel better about themselves when they have something or someone else to talk about. When you’re a mature, emotionally self-controlled person you realize that most often times people will accuse the very thing that’s in their own heart. If they’re corrupt, they accuse others of being corrupt, if they’re fake, they accuse other people of being fake, If they would shove millions in their own pockets if they ran a mega ministry, that’s exactly what they accuse others of, If they could never picture themselves with someone, they accuse the intention of the person who is. etc. They talked about ‪#‎Jesus‬ and sold Him out for 30 pieces of silver, we’re not that special that we’re going to be exempt, SO GET USED TO IT. The good news is, they don’t bother talking about you unless you’re making an impact or they perceive you as some sort of threat. Don’t believe me? Go ahead and google any person you think has significance.

There is a HARD lesson in life that earning an upgrade of spiritual maturity comes with. Not everyone is going to love you, and not everyone is going to like you. In fact, the #bible actually tells us that people will hate you for the stand you take for Christ. (Matt 10:16-33, John 15:18, 2 Tim 2:3-4) But when you understand that ALL things work together for the good of those who love the Lord and were called according to His purpose (Romans 8:28) you’re able to digest those harder lessons. See when someone hates you, it forces you to look at yourself and figure out what it is that they’re seeing that they hate so much. In the words of Bishop Jakes, “folks have hated me on a level I didn’t even know I was on.” Did you catch that tho? Sometimes YOU don’t even fully know the power of the weight of the call and the impact of the anointing God has placed over your life until it causes someone to hate you at a level where they sacrifice moments of their own life just to engage in hating you. There are people in this world who are so miserable in their own lives, instead of fixing what’s wrong with them they invest their time and energy into trying to make other people just as miserable as they are. However, when you can look at yourself and understand exactly what it is that God has given you? When you can get before God and actually genuinely pray for people who do you wrong? You won’t ever spend another moment worried about what someone else may or may not think or say about you because all you will truly care about is at the end of it all hearing the words, “well done my good & faithful servant”.

Gossip is defined as casual or unconstrained conversation or reports about other people, typically involving details that are not confirmed as being true. Nine times out of ten, gossip starts with what one person thinks, feels, or perceives then passes it on. Have you ever played the telephone game? You tell the person next to you something and they whisper it to the person next to them and by the time it gets to the last person the message is something else entirely. Many of us (myself included) have either participated in or been a victim of gossip. Although there are folks in this world that have become rich & famous just because they spread gossip.

Gossip is one of the most destructive forces in the universe. You’re probably wondering, “if it’s so destructive then why do so many people do it?” Well, it’s like anything else. Just because a lot of people do or say something doesn’t make it right. Cigarettes are legal although they’re known to cause cancer, alcohol is legal to be served at most dining establishments although drinking and driving is illegal and the list goes on. It really boils down to personal choice and morals. What kind of person are you? What kind of person do you want to be? Do you want to be a person that lifts others up or tears people down? “A man who lacks judgment derides his neighbor, but a man of understanding holds his tongue. A gossip betrays a confidence, but a trustworthy man keeps a secret” (Proverbs 11:12-13). The Bible tells us that “a perverse man stirs up dissension, and a gossip separates close friends” (Proverbs 16:28). 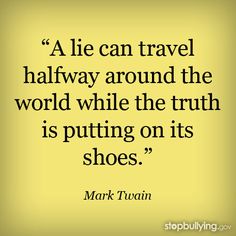 Fam, we have got to be more careful. We can think we have the facts on any given situation and still not have the truth. We live in a day and age of the “screen shot” and “copy & paste” (which means people can alter information before you see it by only showing you parts of a conversation) so the truth of the matter is? Unless you were there personally? You really don’t know the truth and nine times out of ten? It’s not even your business or a matter that you should even be speaking on unless you’re praying because not only can you hurt someone but you may also end up loosing friendships or other relationships due to assumptions made from gossip. I remember when I was in school, gossip normally came to you because somebody told you. In today’s day, you normally find out about a rumor because somebody posted it on the internet.  Have you ever heard the saying “misery loves company”? Well it’s absolutely true. When one person is miserable, they tend to attract other people desiring to also be miserable. 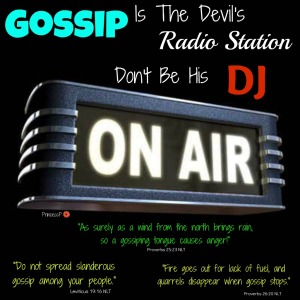 You’ve also got to protect yourself. Your eyes and your ears are the windows to your soul. What comes out of you will only ever be what you put in. There is a whole lot of garbage that flies around our eyes and ears, especially on the internet. Sometimes even if it’s not posted by someone that you know personally, having a mutual person in common may cause some utter trash to fly through your timeline. Believe me, I know. I recently deleted my personal Facebook page (my artist page is still in tact for business purposes) simply because I was sick and tired of all the garbage my eyes had to pass to even get to what I was on for in the first place. The truth of the matter is, the sinful nature of the human being always first sizes up “better than, less than”. It makes people feel better about themselves to deflect what’s wrong with them, if they’re busy pointing out what they think is wrong with you. If they can get enough fingers to point at you? They feel much safer about their deeds, personal insecurities, and flaws becoming exposed. Every single person walking this earth has deeds, insecurities, and flaws the only difference is, some of us have learned to accept the fact that we have an all loving creator that even on our worst day, loves us unconditionally anyway. Once we get secure in this truth? We can start working on ourselves and are okay with being a constant work in progress no matter what other people may say or think. The problem with most people is they’re scared to look at their own flaws and imperfections and instead opt to just live a life explaining why someone else always did something to them and they pretty much just continue on in their miserable, depressing existences trying to discredit others so they can “feel” better about themselves.

What we have to keep in mind though, is “hurting people, hurt other people” plain and simple. No normal, emotionally stable person intentionally tries to hurt other people, that doesn’t even make any sense if you think about it. We can’t control other people, at best we can only hope to control ourselves which includes the way we respond and receive information. Anyone that is close to me and has had one of my famous “QTP lectures” can attest to my famous saying “don’t get upset when someone calls you something you’re not”. I know it can hurt, but we’ve also got to realize that we can be in control about what we actually receive into ourselves and quite honestly if the other person or people involved don’t have an actual heaven or hell to put you in? Don’t worry so much about it. They talked about Jesus, so best believe they’re going to talk about you. Guard your heart and guard your spirit and you’re not a trash can so don’t let people dump garbage on you. 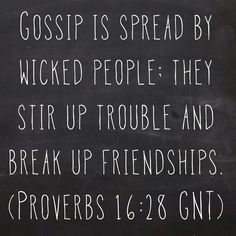